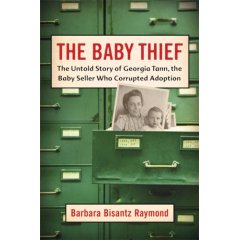 Title: The Baby Thief: The untold story of Georgia Tann, the baby seller who corrupted adoption by Barbara Bisantz Raymond

Synopsis: The harrowing story of Georgia Tann, who from 1924 to 1950 stole or otherwise separated more than 5,000 children from their families. Whether abducting children outright or tricking new mothers still groggy from anesthesia into relinquishing their babies, Tann covered her tracks by replacing the names of birth parents on "amended" birth certificates. Her ploy was legitimized by officials who legalized closed adoption, claiming this would spare adoptees the taint of illegitimacy.

Review: A fascinating, fast paced account of Georgia Tann and how she manipulated the system of adoption.  One of the only good things I can see that came from Georgia Tann's legacy was that she was responsible for removing the stigma that had been attached to children in foster care.  Adoption was rare when Georgia began her life work but she made adoption common and changed the perception of children in foster care from being broken, retarded and mentally ill to children who needed a home and could be molded by their adoptive families.

Georgia Tann was a ruthless, driven woman whose goal was to place children in families that she deemed fit.  She kidnapped children from their biological families, conned women into signing over custody of their children, and took children from foster care and orphanages across the state of Tennessee.  She preyed on single mothers, poor families and widows. She falsified records, changed birth dates, separated siblings and sold children to families that often abused them, treated them like slaves, and some that genuinely loved and cared for them.

During Georgia's rein of power the infant mortality rate of Tennessee skyrocketed, she took children from hospitals before medically safe, she refused medical treatment for her wards and children were often placed severely malnourished, or on the verge of death.  Despite many attempts from physicians and ethical social workers to stop her Georgia had political clout that helped her remain immune from prosecution and helped her get away with her illegal activity for a long time.

Some of what was fascinating about this book is how so much of Georgia's influence still effects adoption laws in the US today.  In most countries adoptees are provided open access to their records once they turn 18 but in the US adoption is closed and held secret mostly due to Georgia's fight to keep records closed to hide her illegal activities.  The issuing of amended birth certificates (replacing the birth parents names with those of the adoptive parents) which is still done today started with Georgia.  Adoptees are still fighting to gain access to their original birth certificates and some states have changed their laws but its a slow process.

She pioneered the advertisement of children to find homes for them and while Georgia's ads were often vile and suggestive there are many organizations today who send out photos of children with short descriptions of their background and personalities in order to try to find homes.  Photo listing of children is common place and segments on the news such as Thursday's Child can trace its roots back to Georgia Tann.

This book was disturbing, but a fascinating look into the history of adoption practices and the impact that one woman had on the adoption laws even today.