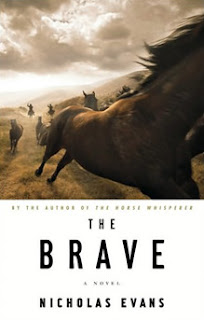 Title: The Brave by Nicholas Evans

Synopsis: As a student at the Ashlawn Preparatory School in 1959 England, eight-year-old, cowboy-crazy Tommy Bedford, the hero of Evans's latest outdoor soap opera, is teased for being a bed wetter and gets the shock of his young life when he learns that his sister, glamorous "Next Big Thing" actress Diane Reed, is really his mother. Soon afterwards, she and Tommy move to L.A., where Diane falls for TV cowboy Ray Montane, and their tortured relationship leads to a horrifying act of violence that has lifelong repercussions for Tommy. In a parallel, present-day plot, 50-ish Tom, now a writer and documentary filmmaker who specializes in the American West, lives in Montana, is divorced and estranged from his adult son, Danny, who has been accused of committing an atrocity while serving in Iraq, for which he will be tried in a military court.

Review: I really like Nicolas Evan's other books, but this one just didn't live up to his previous work. The plot advanced and retreated in a jerky style and I often found myself wondering what year I was in. The story line was good but I wish it had been told in a more cohesive manner.

All the main characters had lived or told profound lies at some time in their lifetimes and the book touched on how those deceptions effected their lives over decades. By about half way through the book I started to get the hang of it but it shouldn't take me that long for a book to hold my attention.  The characters also were not as well developed as previous books which left them feeling shallow and not as sympathetic as they could have been.

All in all the plot was there but I felt the delivery failed.  If you want to try a Nicholas Evans book I would suggest one of his previous books like the Horse Whisperer