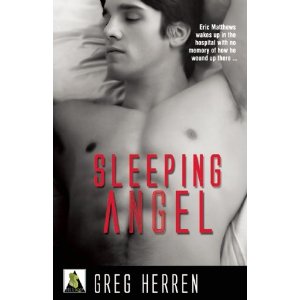 Synopsis: Eric Matthews survives a near-fatal accident only to find his whole life has changed.

Eric Matthews wakes up in the hospital with no memory of how he wound up there—and soon learns that it’s vital that he remember. Apparently, he was in a car accident—and the body of classmate Sean Brody was found in his car, shot to death. But nothing makes sense to Eric. He and Sean weren’t friends. In fact, they disliked each other--Sean was gay and Eric is...well, he's not sure of much right now! Except he is certain he didn’t shoot Sean, even though he can’t remember anything about the day of the accident.

To make matters worse, he starts having psychic flashes about the people around him: his doctor, a nurse, his mother, and other visitors.  As Eric’s memories slowly start to come back to him, he becomes more and more certain that not only is he innocent, but that the real murderer is out there….and wants to shut him up permanently.

Review: As I've said in the past I love Greg Herren, his books are some of the best mind candy but this one surprised me. This book wasn't just mind candy, it had a message, and a very important and timely one.

This is Greg's 2nd young adult book and I have to say I liked it much more than the first one.  The characters seemed more genuine and the story very real. The characters came to life in this one and I found myself pulled along on Eric's journey of self discovery. Unfortunately I also have to say that the subplot of Eric obtaining psychic powers didn't seem very relevant to the story, it didn't add anything to the plot but it didn't take anything away from it either it just seemed unnecessary

As Eric slowly tries to piece together what happened before his accident he starts to learn things about himself that he doesn't like.  Realizing he was a bully and that his actions may have caused so much harm really effects him and makes him start taking a look at who he was and who he wants to be.  Its interesting to note that before the accident Eric didn't see himself as a bully, to him his actions were funny to him and his friends and he didn't realize the effects they had on the people he was teasing or how others were viewing him.

As a the big man on campus, the football captain and star athlete his words and actions carried weight.  People looked up to him and followed his lead.  If he had stood up for people being bullied instead of being the bully himself he may have created change instead of creating harm. This insight is the strongest message in the book, not all bully's realize that what they are doing is hurting others.  Maybe this book can make them take a look at themselves and their actions and hopefully make a change.