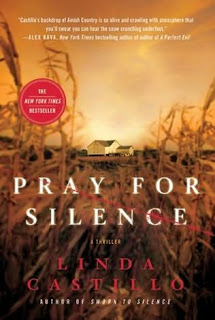 Synopsis: Someone slaughters all seven members of the Amish Plank family at their home in Painters Mill, Ohio. The bodies of the two teenage daughters show signs of torture. At first, it appears the father, Amos, killed his wife and five children, then shot himself. When clues point to a killer outside the family, Kate Burkholder, the local police chief who left the Amish community decades before, zeroes in on 15-year-old Mary, who may have flirted with the idea of living in the English world. Lending a hand is Kate's on-again/off-again boyfriend, John Tomasetti, an agent suspended from the Ohio Bureau of Criminal Apprehension and Identification for failing a recent drug test in the wake of his own family's murder about two years earlier.

Review: The grisly murder of an entire Amish family really strikes a cord with Chief of Police Kate.  When she discovers that the daughter Mary may have been the reason the family was targeted Kate starts digging into her life only to find there are many parallels to Kates own past.  Keeping this case at a distance isn't working for Kate and she starts to lose her objectivity.

Kate and John's characters sort of dangle on strings in this book not really knowing what they are doing or why.  I understand that Kate and John are damaged but they are bordering on dysfunctional in this book.  They need to get it together because their issues getting in the way of their work is getting old and its only the 2nd book! Don't get me wrong I zipped through this book and will read the next one but reading about the angst and issues surrounding the two main characters was like circling a drain.  Something has to change for me to continue to be sympathetic to these characters.

Castillo's portrayal of Amish life is fabulous.  Living so close to Lancaster County I have been stuck behind a buggy or two in my time and while I don't agree with all their ways I admire them for living a simpler life. If you are a fan of Amish stories and murder mysteries then this is one to pick up, the series is good and I'm hoping it will only get better.  Beware though Castillo's details can be graphic at times so the squeamish should be wary.
Labels: Amish Castillo murder Ohio Painters Mill Pray for Silence