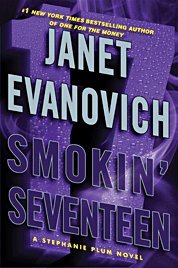 Synopsis: Dead bodies are showing up in shallow graves on the empty construction lot of Vincent Plum Bail Bonds. No one is sure who the killer is, or why the victims have been offed, but what is clear is that Stephanie’s name is on the killer’s list.

With a cold-blooded killer after her, a handful of hot men, and a capture list that includes a dancing bear and a senior citizen vampire, Stephanie’s life looks like it’s about to go up in smoke.

Review: After finishing the second book in the Game of Thrones series I thought I would give myself a break with some mind candy.  This book seemed a bit too much like the last.  While there were many moments I chuckled and laughed out loud there were many more that lead me to believe I was reading the same book I just finished a few weeks ago.

Sizzling Sixteen had roaming cows, this had roaming Roosters, Sixteen had alligators, this one had vampire skips, Sixteen had hot sex with Morelli, Seventeen we switched to Ranger.  Its starting to get old.  I love these book but I need more.  Stephanie needs to make a decision or get better at her job because one more cluck-in-the-bucket extra crispy book like this one is going to make me turn to someone else.