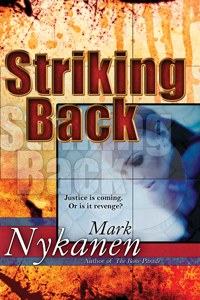 Title: Striking Back by Mark Nykanen

I received this book through netgalley.com - their site states that it isn't due to be published until July 24 2013 but it is for sale on amazon.com

already in kindle and paperback.  You figure that one out.

Synopsis: Los Angeles therapist Gwyn Sanders keeps her ugly family history to herself. More than twenty years ago, when she was still a teen, her violent stepfather died a grisly, mysterious death. Gwyn knows
all the secrets but she's not talking about the past-she's too busy trying to change the future by breaking the cycle of domestic violence. The men she counsels aren't saints, but maybe she can change the mindset that makes their lives-and the lives of the people closest to them-so miserable.

But when someone starts killing her controversial clients, Gwyn becomes LAPD's primary suspect. After all, there's the unsolved mystery of her stepfather's bizarre death. Maybe Gwyn has a hidden desire for justice that's far from therapeutic. Dr. Howard "Hark" Harken says he believes her. The forensic psychiatrist is an expert on serial killers, but a questionable death lingers in his own past-of a woman who bears an uncanny
resemblance to Gwyn.

Review: Fast paced and not completely predictable.  I was pleasantly surprised by this book.  The story held my attention and the characters didn't seem over the top with the exception of maybe the cartoonish cops that kept following Gwyn around.  They were a bit over the top but the rest of the characters were fairly well portrayed even the situations that they found themselves I could see happening.

For someone who always seems to know the end of the book by the first few chapters this one had me guessing a bit and not quite certain until the very end (I was torn between two of the characters).  If you like fast paced mysteries this one will keep your attention.  I would say its a great beach read.