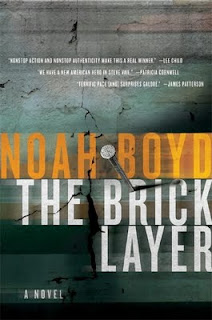 Title: The Bricklayer by Noah Boyd

Synopsis: FBI deputy assistant director Kate Bannon tracks down Steve Vail, a maverick FBI agent who left the bureau for a new life as a Chicago bricklayer, because she needs Vail's help in apprehending a criminal gang, the Rubaco Pentad, with a grudge against the FBI. The Pentad follows up the murder of L.A. reporter Connie Lysander, who wrote a story critical of the FBI, with ever-increasing demands for money from the bureau to forestall future killings and the setting of sophisticated death traps. When an agent disappears while making a payoff to the gang, he becomes a prime suspect, despite Vail's reservations.

Review: This was an exciting, nonstop action thriller.  The writing isn't the highest quality and there were some places that could have been written better but it didn't matter because the characters and the story were just so fun.  Noah Boyd knows how to keep readers on the edge of their seat waiting to see what happens next and try to figure out the clues.  We are sure to see more of the "Bricklayer" in other adventures.

Steve Vail is like an investigator savant, he sees through things that others miss, he connects dots that others don't see and he doesn't like to play by the rules. Kate Bannon is on the fast track of her career with the FBI and her connection to Vail is unmistakable.  They work well as a team both on and off the job.  I'm eager to find out where Boyd takes this relationship.

The ending was a bit predictable but this book was still a great read.