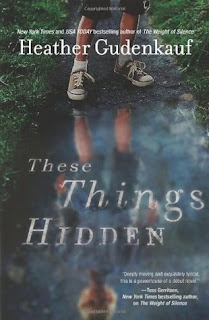 Synopsis: These Things Hidden opens with the release of 21-year-old Allison Glenn from prison, where she has served five years for an unspecified but particularly horrible crime. Allison is reluctant to enter a halfway house in her hometown of Linden Falls, Iowa, where "even a heroin-addicted prostitute arrested for armed robbery and murder would get more compassion than I ever will." Allison, her family's former golden girl, secures a job at a local bookstore, but her efforts to resume some sort of normal life are undermined by her well-to-do parents' indifference, her sister's hatred, and the stigma of her conviction. Meanwhile, one little boy holds the key to the tragedy that led to Allison's imprisonment.

Review: I find myself stuck when it comes to writing this review...maybe because of the information the author gives in the back of the book regarding Safe Haven laws (where you can abandon your child at specified locations without fear of prosecution) These laws were meant to curtail the number of infant deaths by their parents hands but there is no statistical evidence that this actually works.  In fact women who kill their children are still killing their children...it is usually done in an act of desperation and fear - no thought. I am highly against safe haven laws, they are bad for children and give women a pass for abandoning their child instead of creating a plan for their care.  Now I will get off my soap box and talk about the book...

Heather Gudenkauf does a good job of slowly revealing the details of this twisted tale.  Allison, the perfect child who was just released from prison is sent back to live in her home town which sets off a chain of events and tragedy that no one saw coming.

Allison's parents are exactly the type of people most parents hope they will never be, judgmental, demanding, and cold. Brynn, Allison's sister lives in another town with her grandmother because she couldn't take the pressure after Allison left.  When Allison returns home to claim some of her stuff she finds that both she and her sister have been erased from her parents house as if they didn't exist. Charm's family consists of a step-father who is dying of lung cancer, a missing brother who she hasn't heard from in years and a mother who uses men like tissues.  Its no wonder that so much drama and unknown tragedy take place in this crazy town!
The only decent parent in town that we meet is Claire and her husband who are parenting their 5 year old adopted son who seems to have anxiety issues or some other undefined mental health issue that is never addressed.

This book is thought provoking and did contain a mystery that kept me flipping back and forth between ideas of what was going on.  I didn't really see the ending coming until it did.  Good read but I'm still not a fan of anonymously abandoning your child and actually if this child had been placed for adoption through regular channels half of the tragic consequences wouldn't have occurred.