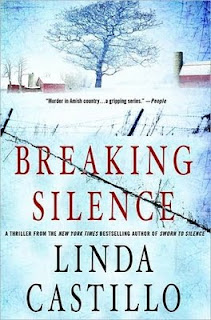 Synopsis: The Slabaugh family are model Amish farmers, prosperous and hardworking, with four children and a happy extended family. When the parents and an uncle are found dead in their barn, it appears to be a gruesome accident: methane gas asphyxiation caused by a poorly ventilated cesspit. But in the course of a routine autopsy, the coroner discovers that one of the victims suffered a head wound before death--clearly, foul play was involved. But who would want to make orphans of the Slabaughs' children? And is this murder somehow related to a recent string of shocking hate crimes against the Amish?

Having grown up Amish, Kate is determined to bring the killer to justice. Because the other series of attacks are designated hate crimes, the state sends in agent John Tomasetti, with whom Kate has a long and complex relationship. Together, they search for the link between the crimes--and uncover a dark secret at work beneath the placid surface of this idyllic Amish community.

Review: A dark tale with two plots that converge into one.  One is the hate crimes against the Amish that are taking place throughout the county and the other is the murder of the parents and Uncle of 4 Amish children.  Are the two related or just a crazy coincidence?

I really like this installment of Linda Castillo's series.  She could hold off on some of the descriptive gore but the characters are unique.  I am finally seeing some growth from the main character Kate as she struggles with her relationship with FBI agent John Tomasetti, but I would love for us to be introduced to her family.

This story does have a much darker tale than the other books and I can't really say anything else about it without revealing too much but it is a great story and the plot moves you along with an ending that I didn't totally see coming.
Labels: Amish