(71) Small Towns with lots of skeletons 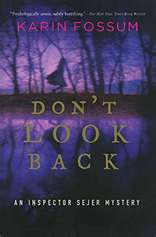 Synopsis: English debut features older, widowed Inspector Konrad Sejer who is trying to solve a murder that took place in a small Norwegian village. Neighbors know neighbors and children play happily in the streets. But then the naked body of a teenage girl is found. Annie was strong, intelligent, and loved by everyone. What went wrong? Called in to investigate Inspector Sejer uncovers layer upon layer of distrust and lies beneath the town's seemingly perfect facade.

Review: I bought this book because it is the first of the Inspector Sejer series that was published in English.  I received an e-galley from Netgalley of the latest Fossum book, but wanted to get a feel for the characters before I jumped to the end of the series. I loved it's slow methodological pace. The case wasn't solved overnight and the characters didn't have all the answers.  In fact with no evidence they had to rely on interviews and more interviews to try to find anything that they could latch on to to solve the senseless death of a young well loved teenager.

This is another Norwegian import and the debut of Inspector Sejer in the US.  Unfortunately it is also 5th in the series so there are times when you know you are missing some back story but this doesn't affect the overall book.  If you liked the Killing on AMC you will like this.  Its not a mad race to the finish but with steady methodical police work the Inspector uncovers not only the mystery of who killed Annie but also why.