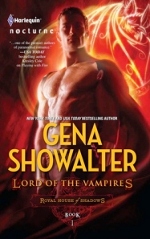 Title: Lord of the Vampires by Gena Showalter

I received this as an advanced electronic book from netgalley.com This title was released August 23, 2011

Synopsis: Nicolai the Vampire is renowned for his virility, but in a cruel twist of fate “The Dark Seducer” has become a sex slave in the kingdom of Delfina—stripped of his precious timepiece and his memory. All that remains is a primal need for freedom, revenge—and the only woman who can help him.

When the wanton vampire summons Jane Parker, she is helpless to obey. She's drawn to his dark sexuality and into his magical realm. But for this human, all is not a fairy tale. For saving Nicolai could mean losing the only man she's ever craved.

Review: I love Gena Showalter so I was excited to see this book - what I didn't realize is that it is the first in a series with each characters story being told by a different author.  That being said I felt Showalter had too much to do in this book - establishing all the background to the story and then sliding into the story of Nicolai the eldest son and King of Elden.  There were many places that felt rushed, and at times I thought the book would end without any resolution to Nicolai's story.

There was plenty of hot steamy scenes which Showalter does so well but there were so many unknown factors that seemed to be tossed in almost as an aside.  I think this book is okay but there was so much potential for it to be great.  I'm not sure if Showalter was given a page limit but it seemed that way.  If the book had just been a tad longer I think she would have been able make things flow a little better.  Overall not a bad start to a new series, but not Showalters best.