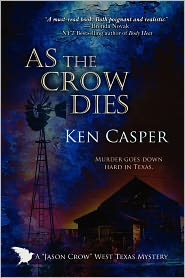 Title: As the Crow Dies by Ken Casper

Synopsis:Vietnam took his legs. A murderer took his father. Somehow, Jason Crow has to take a stand.

Jason Crow comes home to Texas on clumsy, prosthetic legs, struggling with his lost dreams and the pitying curiosity of friends and strangers. But there's no time for him to brood, because his father has just been shot to death.

Unable to convince the police that his father was murdered, Jason begins his own investigation. In the process he uncovers family secrets that shake him to his core and make him question everyone and everything around him, including the love of Michiko, the beautiful Eurasian-American nurse he met in Japan.

While fighting his own insecurity as a double amputee, Jason must challenge forces capable of destroying him and those he loves to pursue the person who robbed him of his greatest hero: His dad.

Review: An interesting ride into the past.  I was only a child during the 70's and I lived in a big city so I don't know that we had as much racial tension as Jason does in his small town.  His father was business partners with a black man, his sister is dating a black man his brother is a draft dodging junkie and he is an ex-football star turned double amputee.  Life is not what Jason expected it to be.

This is a slow moving mystery that gives you a taste of what life was like back in the 70's during the war. I really liked the look back in time and the slow unfolding of the mystery as well as Jason's coming to terms with his disability.  This is a great debut for a new author.