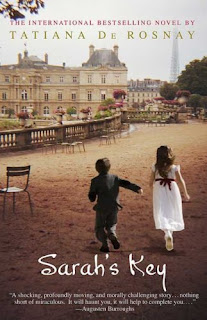 Synopsis:  A fictionalized account of the 1942 Paris roundups and deportations, in which thousands of Jewish families were arrested, held at the Vélodrome d'Hiver outside the city, then transported to Auschwitz. Forty-five-year-old Julia Jarmond, American by birth, moved to Paris when she was 20 and is married to the arrogant, unfaithful Bertrand Tézac, with whom she has an 11-year-old daughter. Julia writes for an American magazine and her editor assigns her to cover the 60th anniversary of the Vél' d'Hiv' roundups. Julia soon learns that the apartment she and Bertrand plan to move into was acquired by Bertrand's family when its Jewish occupants were dispossessed and deported 60 years before. She resolves to find out what happened to the former occupants: Wladyslaw and Rywka Starzynski, parents of 10-year-old Sarah and four-year-old Michel. The more Julia discovers—especially about Sarah, the only member of the Starzynski family to survive.

Review: This little known period of history was fascinating to me.  I had no idea that this happened in France in 1942 and I'm devastated to learn about it now.  Why is it left out of history teachings on the Holocaust? While some reviews I read felt that this book lacked the culpability of the French people I have to disagree.  While the character Julia was investigating the Vel d'Hiv she found that most people didn't want to talk about it or even want her asking questions about it.  They wanted it hidden.  Even the monuments she uncovered didn't mention the French as the one's who rounded up the Jews just that it was the Nazi's.  I think that Julia's dismay to the lack of culpability and the way she doggedly goes after the story despite people trying to block her path saying that it should be left in the past and that no one would want to read about it is putting a subtle spotlight on a sad piece of history that France would like to forget they played a major role in.

The book alternated between 1942 and the present until the story gets tied together toward the end.  I loved the flow of the book and found it to be an easy and engrossing read.  If anything it makes me want to learn more about the Vel d'Hiv.  I haven't seen the movie version of this book that was recently released but I might have to go see it.