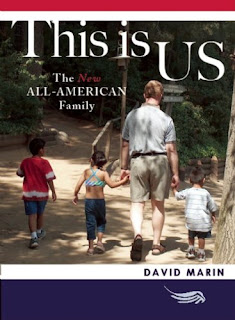 Title: This is Us: the new all American Family by David Marin

Synopsis:When David Marin fell in love with three abandoned children desperately in need of a home, there was only one thing he could do. Give up his relatively carefree life and learn how to become a parent. In the process, he found the future he had always wanted, but he also learned some hard lessons about single-parent adoption, the Kafkaesque side of Social Services, and America's anti-immigrant sentiment: Heartbreaking, funny, and inspiring, This Is US chronicles Marin’s quest to create a better life for these children—and for himself.

Review: David Marin's account of adopting three children from Foster care is a delight.  Witty, and laugh out loud funny in some places yet aggravating and sad in others.  David Marin had to jump through more hoops than the average adoptive parent because he was a single man.  Many social workers at DHS didn't want to place children with him and certainly didn't agree with placing three Latino children with a red haired man, never mind that David is half Puerto Rican.

He is stopped by cops, has set backs with the legal system and through it all he keeps his humor.  Its amazing and uplifting.  Then there are all the pitfalls to new parenting which as David is the first to admit, "small mammals know more about parenting" than he did.  But yet her persevered, through racism, bosses that pushed him out because of his want of family and social workers who did everything to get in his way.

Anyone who can go through that and still have the ability to be witty and humble is amazing.  His children are very lucky to have such a wonderful father.