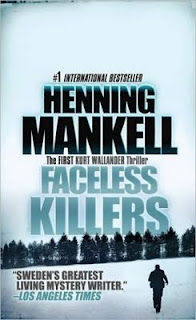 Synopsis: It was a senselessly violent crime; on a cold night in a remote Swedish farm house an elderly farmer is bludgeoned to death, and his wife is left to die with a noose around her neck. And as if this didn't present enough problems for the Ystad police Inspector Kurt Wallander, the dying woman's last word is foreign, leaving the police the one tangible clue they have - and in the process, the match that could inflame Sweden's already smoldering anti-immigrant sentiments.

Unlike the situation with his ex-wife, his estranged daughter, or the beautiful but married young prosecutor who has piqued his interest, in this case Wallander finds a problem he can handle. He quickly becomes obsessed with solving the crime before the already tense situation explodes, but soon comes to realize that it will require all his reserves of energy and dedication to solve.

Review: I have found myself a little obsessed myself these days.  I have a fascination with Nordic mysteries.  I think one of the things that intrigues me so much is that they are so different than what I thought that part of the world was like.  Whenever I watch anything on Sweden or Norway it is always depicted as so idealistic.  Little crime, where you can leave your stroller on the street and it won't get nicked etc.  But these books depict another side, the darker side of these idealistic communities and I'm hooked.

Henning Mankell has created a great character in Kurt Wallander, the middle aged, divorced police officer.  In this book I think Wallander isn't just looking to solve a crime he is looking for himself.  Floundering after his divorce, trying to repair a relationship with his daughter, learning how to be a son to a man who he feels has been disappointed with him since he decided to become a police officer.  Throughout the investigation he learns more about himself and starts to see his father in a new light.  He's a good cop, just a bit lost at the moment.

I think thats one of the other aspects of these mysteries that I am drawn to.  The characters are all a bit flawed, and average.  They don't solve mysteries in the blink of an eye, random facts don't just jump out of the blue, they plod through these crimes uncovering evidence piece by piece in a very realistic fashion.  I will have to say if I ever drank as much coffee as these guys do though I don't think I would ever sleep.

So if you have a thing for flawed characters, crime solving and cold Wintry landscapes try some of these writers that are getting more exposure thanks to Stieg Larsons Millenium trilogy.