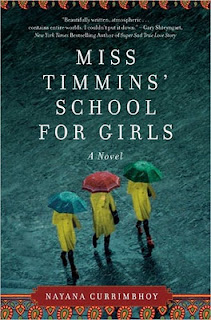 Synopsis: A murder at a British boarding school in the hills of western India launches a young teacher on the journey of a lifetime In 1974, three weeks before her twenty-first birthday, Charulata Apte arrives at Miss Timmins' School for Girls in Panchgani. Shy, sheltered, and running from a scandal that disgraced her Brahmin family, Charu finds herself teaching Shakespeare to rich Indian girls in a boarding school still run like an outpost of the British Empire. In this small, foreign universe, Charu is drawn to the charismatic teacher Moira Prince, who introduces her to pot-smoking hippies, rock ‘n' roll, and freedoms she never knew existed. Then one monsoon night, a body is found at the bottom of a cliff, and the ordered worlds of school and town are thrown into chaos. When Charu is implicated in the murder—a case three intrepid schoolgirls take it upon themselves to solve—Charu's real education begins. A love story and a murder mystery, Miss Timmins' School for Girls is, ultimately, a coming-of-age tale set against the turbulence of the 1970s as it played out in one small corner of India.

Review: I had mixed feelings about this book.  I really liked it in the beginning but really struggled with it in the end. I'm not sure if this was due to the fact that my school term is ending and I have a bunch of other reading to do and papers to write or if it just fell flat at the end.  Coming of age story has been tossed around a few times in relation to this book but I'm not sure if that's accurate.  Its more of a film noire in book form.  The young innocent teacher discovers more about the world and it changes her.

Charu Apte is a young teacher from a small town who comes to a small private British school to teach English. She finds herself thrust into a world where the color of your skin is even more important than the rest of India and anything British is better.  Teachers are seated at lunch according to their race, whites with whites, then the mixed blood Indian's then the full Indians.  Charu is drawn to the unconventional Moira Prince (Prin) for short and the odd ball characters she hangs out with. Where she learns to smoke cigarettes, marijuana, drink and explores her forbidden feelings for Prin.  You don't read many lesbian subplots in Indian books so this was a nice change.

After Prin is found dead at the bottom of a cliff the story turns more toward a murder mystery. Some of the girls from the school take it upon themselves to discover the mystery behind who killed the young teacher and during their investigation they uncover many deep secrets that may have led to her demise.

All in all it was a good book I found it just a bit tedious toward the end but that might have just been my frame of mind with all the other things I had on my plate.  I would recommend anyone give it a try.  I'm not usually a fan of Indian authors but I did enjoy this one.
Labels: India lesbian murder mystery noir fiction