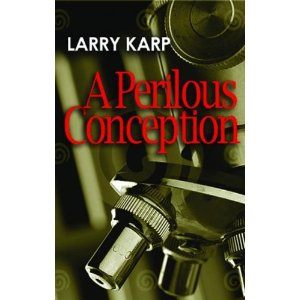 I received this book as an advanced electronic galley from netgalley.com It was released Dec 6, 2011.

Synopsis: It’s 1976. Despite fierce international controversy over whether in vitro fertilization should ever be performed in humans, doctors around the world race to be first to produce a baby by this procedure. Dr. Colin Sanford, a brilliant, ambitious obstetrician in the Pacific Northwest city of Emerald, has a plan. He recruits Dr. Giselle Hearn, an experienced laboratory geneticist-embryologist at the University. Drs. Sanford and Hearn, working secretly, set out to put their names in history books.
Several months later, Dr. Sanford’s patient, Joyce Kennett, gives birth to a healthy boy, and Sanford prepares to make an announcement at a press conference. But before it convenes, Ms. Kennett’s marginally- schizophrenic husband kills Dr. Hearn and then himself. Police Detective Bernie Baumgartner’s investigation is hampered by pressure from influential people at the University who want to control sensationalism that might harm the institution. Tenacious Baumgartner suspects more at play...

Review: I had a tough time with this book.  I wanted to like it but it just wasn't happening for me.  I don't need to love the characters of a book to actually enjoy it but there should be someone that I can route for but I didn't even find that, with the exception of really liking the locksmith character who is a friend of Baumgartner and not really a main character to the book.

Dr. Sanfords character has a massive god complex which can be common given his profession but he begins to seriously grate on every nerve, Baumgartner is a cop before anything else. I can't even say he is a good cop since he breaks more rules than Stabler on Law and Order SVU. Plus he basically just ignores his wife which was random and not necessary to the plot.

The mystery isn't much of a mystery and you can figure out what is going on rather quickly.  There is a bit more of a twist toward the end of the book which made it start moving more quickly but in the end I was just left rather empty. Unfortunately the best thing I can say about this book is that if you want to know about the history of IVF there is plenty of that in here.