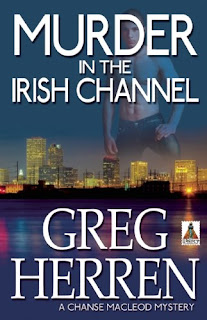 Synopsis: It begins as a simple missing persons case—a young MMA fighter's mother has mysteriously disappeared. But as New Orleans private eye Chanse MacLeod starts digging around, he discovers that she is the leader of a group fighting the powerful Archdiocese of New Orleans over the closing of two churches. As the trail leads from corrupt church officials to powerful real estate developers to the world of cage fighting, Chanse soon realizes there are a lot of powerful people who want to make sure she stays gone—and don't have a problem with getting rid of a pesky gay private eye.

Review: There are many twists and turns in this book and I have to say I didn't see the outcome.  This series just gets better and better.  While this series isn't as racy as his Scotty series seems to be, its just as entertaining. I appreciate that Chanse's character isn't written over the top. His life is just as complex and mundane as the rest of us.  His assistant and occasional stripper Abby is a fabulous addition to this series. I love her spunk and drive.

The story takes place in New Orleans, post Katrina and the atmosphere and the descriptions of the city are masterfully done, even little details about the different Mardi Gras krewes make the atmosphere realistic. Makes me long to go back and get a po'boy.