(4) How it Feels to Have a Gay or Lesbian Parent 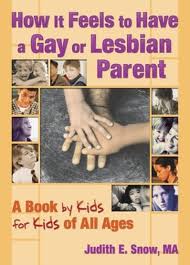 Title: How It Feels to Have a Gay or Lesbian Parent: A Book by Kids for Kids of All Ages by Judith E Snow
Publisher: Harrington Park Press
101 Pages
Genre: Non-fiction

Synopsis: How It Feels to Have a Gay or Lesbian Parent: A Book by Kids for Kids of All Ages gives voice to the thoughts, feelings, and experiences of children, adolescents, and young adults who have a gay or lesbian parent. In their own words, they talk openly and candidly about how and when they learned of their parent’s sexual orientation and the effect it had on them—and their families. Their stories echo themes of prejudice and harassment, conflict and confusion, adaptation and adjustment, and hope for tolerance and a family that can exist in harmony.

Review: The kids interviewed for this book range in age from seven to thirty-one.  It is interesting to see the differences and the similarities in all of their situations.  It seems that most of them were okay with their parents being gay it but when they were in elementary school or middle school they were scared their friends would make fun of them. Once the teens hit high school they didn't care as much but many were selective about who they told.  The other interesting thing I found was that most of the kids were more concerned about their parents being happy and wishing that their parents were still together despite them liking the other people in their parents lives.  Almost all of the kids expressed that they were either happy to know other kids with gay parents or that they wished they did know other kids with gay parents.  Sharing that bond was important for them.

I really liked hearing the stories from the kids point of view and seeing how they were similar or different depending on their ages.  This book was originally printed in 2004, I would love to see a follow up book with a whole new crop of teens and pre-teens since there have been so many significant changes in the world since it was first published. Not to mention I think there are many more visible LGBT families out there now.

I think this book could be very valuable to kids whose parents are just coming out or are having a hard time adjusting to their parents being gay.  Knowing that there are other kids in their shoes and knowing that they might feel similar makes you feel not as alone.