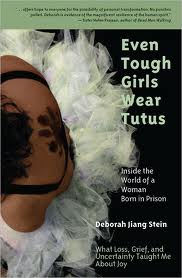 Synopsis: The story of a woman whose gift for finding purpose in life drives her to help others change their lives even as she struggles to accept and overcome her own past - born heroin addicted to a mother in prison. Her story proves we're more than a sum of our parts, and there's always a chance for redemption.

Review: Deborah Jiang Stein's story could be tragic instead its empowering, it could be depressing, instead its uplifting.  I finished this book in a few hours because I couldn't put it down.  Brutally honest and unapologetic Deborah tells the story of finding out as a young girl that her birth mother gave birth to her while in prison and how she lived in a foster home before she came to live with her adoptive family.  This information colors Deborah's life from that point forward.  From her spiral into drug and alcohol addiction, drug running and petty crimes to getting sober, reconciling with her family and creating a fabulous life with two kids and a career not only as an author but a speaker and supporter of women in prison.

Deborah was adopted by a white Jewish family in the 1960's while segregation was still alive and well.  She doesn't know what race she is, but she knows she isn't white.  Her parents thought ignoring her differences were best as well as ignoring her past.  They didn't know any better.  Her parents were renegades, adopting a multi-racial child before it was acceptable, they were in academia and outsiders due to their religion. All these things could have led Deborah to remain a bitter and angry person but she has reconciled her past seen the gifts her parents have given her and uses them to inspire her children and the women she speaks with in prison. A wonderful uplifting novel of redemption, forgiveness and finding peace within yourself.