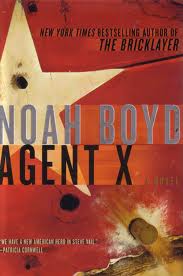 Synopsis: An officer at the Russian embassy—a man known as Calculus—has approached the FBI offering to sell a list of Americans who are giving confidential information to the Russian SVR. But before a deal can be made, Calculus is recalled to Moscow, and the Bureau fears the Russians will be hunting down and killing the traitors unless the FBI can find them first.

FBI agent-turned-bricklayer Steve Vail thought he was done with the agency, but the Bureau has another unsolvable problem, and it has Vail's name written all over it. Finding the hidden turncoats, however, won't be easy—in fact, it could be downright deadly. And even with the help of FBI Assistant Director Kate Bannon, the Bricklayer's going to have to come up with a few new tricks of his own if he hopes to survive.

Review: Steve Vail can see things others can't.  That doesn't mean he's psychic it just means that he can look at documents and information and process them differently...he sees the bigger picture. For an FBI agent this is a great gift but Steve Vail isn't FBI, at least anymore.  He can't play by the rules, doesn't like to answer to people and has trust issues.  So why does he keep getting sucked into FBI investigations? His achilles heel, Kate Bannon.

I like the character of Steve, and I like the interplay between him and Kate. Their on again off again relationship is entertaining. The mysteries are always interesting and a good puzzle, however there were so many layers in this book it was hard to sometimes follow the flow. There were also parts of this book that felt like deja vu.  I'm not sure if similar scenes were in his last book or in a book by a different author but there were some things that just felt like I had read them before.*

Sadly the author of this and his last book The Bricklayer died in September 2011, it would have been nice to see where he took his characters.

*This usually doesn't happen to me but it seems it did in this case...I apparently read this book back in August 2011 - which is why some of it seemed so familiar! Oh well - apparently I liked it