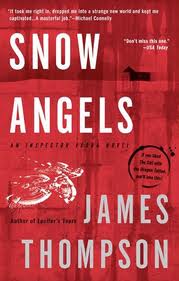 Synopsis: Shortly before Christmas, Kari Vaara, the police chief of the Lapland town of Kittilä, gets a phone call informing him that the body of Sufia Elmi, a Somali refugee and minor film star, has been found in a snowfield on a reindeer farm. The victim has also been mutilated, perhaps raped, and a racial slur carved into her flesh. When Kari's ex-wife's lover becomes the prime suspect, Kari spurns the chance to recuse himself and presses on. The winter hazards of alcoholism, suicide and murder all play a part as Kari uncovers more suspects. Sufia's imperious father, Abdi Barre, who was a doctor in his native country and now runs a cleaning service, puts added pressure on Kari.

Review: Thompson paints a bleak picture of Finland during Kaamos, the countries two weeks of complete darkness. Residents tend to stay drunk, fall into deep depressions and suicide rates climb.  But through this all police chief Kari Vaara tries to maintain order.  After the vicious, brutal homicide of a refugee, Kari finds himself mixed up in a press nightmare.  His ex-wife's lover is the prime suspect, the son of a high profile business man the next suspect on the list. As Kari digs deeper the clues lead him to a deepening black hole that will either boost his career or tank it.

The best part of the book is the characters and the setting.  You could feel the biting 40 degrees below zero as you turned the pages, the bleak endless night that drives people mad, and the feeling of hopelessness that it can hold. Intertwined in this was a mediocre mystery that was boosted by its setting and characters. Given that this is the first in a series I am hoping the others are a little better in the plot department but the characters and setting are flawless. If you read it for nothing else but the atmosphere you will have won.
Labels: Finland homicide James Thompson Kari Vaara mystery Scandinavian mystery