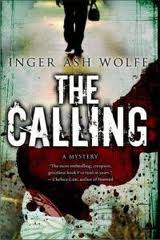 Synopsis: Detective Inspector Hazel Micallef has lived all her days in the small town of Port Dundas, Ontario and is now making her way toward retirement with something less than grace. Hobbled by a bad back and a dependence on painkillers, and feeling blindsided by divorce after nearly four decades of marriage, sixty-one-year-old Hazel has only the constructive criticism of her mother (the former mayor) and her own sharp tongue to buoy her. But when a terminally ill woman is gruesomely murdered in her own home, Hazel and her understaffed department must spring to life. And as one terminally ill victim after another is found, Hazel finds herself tracking a truly terrifying serial killer while everything around her spins out of control.

Through the cacophony of her bickering staff, her unsupportive superiors, a clamoring press, the town's rumor mill, and her own nagging doubts, Hazel can sense the dead trying to call out. Will she hear them before it's too late?

Review: I loved that the main character of this book isn't some svelte young beauty who is new to the job and solves the mystery all by herself with hardly a clue.  Instead the main character Hazel is a 61 year old woman, recently divorced, and close to retirement who abhors technology. Hazel is also hobbled by a bad back for which she relies on pain killers and whiskey to help, and has an 80 year old mother who is constantly torturing her to lose weight so she can find a new husband. Her department is in a small town in Canada and is constantly being slated for closure.  Her superiors don't think much of Hazel and are constantly denying her requests so when she stumbles on the idea there may be a serial killer on the loose its no wonder that she tries to solve it herself with no help from the higher ups.

The death of a local woman is what sparks the investigation and when they find that he is targeting terminally ill people the question becomes is he doing this out of compassion or is he acting on some sick compulsion.  Leaving behind bodies that are killed mercifully but then brutally and calculatingly butchered to cover up the crime leads them on a chase from the West Coast of Canada to the East Coast of Canada.

I found this a fun fast read.  I couldn't put it down.  Some people are down on the police procedures not being accurate, but honestly I don't know Canadian procedure and I was just looking to be entertained I wasn't trying to learn about the Canadian judicial system. Inger Ash Wolfe has a new book out called Taken that is the second in this series, can't wait to read it.