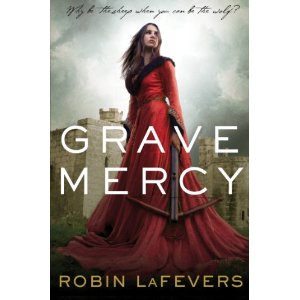 I received this book as an electronic galley from netgalley.com. This title is due to be released April 3, 2012

Synopsis: Seventeen-year-old Ismae escapes from the brutality of an arranged marriage into the sanctuary of the convent of St. Mortain, where the sisters still serve the gods of old. Here she learns that the god of Death Himself has blessed her with dangerous gifts—and a violent destiny. If she chooses to stay at the convent, she will be trained as an assassin and serve as a handmaiden to Death. To claim her new life, she must destroy the lives of others.

Ismae’s most important assignment takes her straight into the high court of Brittany—where she finds herself woefully under prepared—not only for the deadly games of intrigue and treason, but for the impossible choices she must make. For how can she deliver Death’s vengeance upon a target who, against her will, has stolen her heart?

Review: I really liked this book.  I whizzed right through it. There is a lot of politics and political maneuvering that might not be over the heads of some of the younger YA audience but it reminds me of some of Tamora Pierces books with the strong female lead character.  Grave Mercy is like a romance mystery novel without the graphic sex.

Ismae is a strong female character who goes from being a victim to being a strong independent woman who learns that she doesn't have to follow someone else's orders but can think for herself. She goes from being an abused child to a convent where she becomes a handmaiden of Death and learns the art of assassination.  She has several gifts, like being immune to poison, and the ability to see those whose life is leaving them. She gets her assasination orders from the convent but what if they are wrong? While she is left on her own to navigate high society and the political workings of court she discovers that blindly following orders isn't always the best thing and that maybe her purpose is different than what she was originally told.

I like that you see Ismae develop, going from naive girl to a more self confident woman.  This is a strong start to a series.
Labels: grave mercy heroine robin lafevers ya