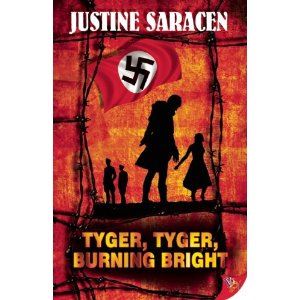 I received this book as an electronic e-galley through netgalley.com it was released March 13, 2012.


Synopsis: Twelve years of terror end with a world in flames. Behind filmmaker Leni Riefenstahl’s stirring footage of a million joyous patriots, the horror of Nazi Germany slowly unfolds. It engulfs Katja Sommer, a “good German” with dangerous desires; Frederica Brandt, a traitor to her homeland; Rudi Lamm, a homosexual camp survivor and forced soldier for Hitler; and Peter Arnhelm, a half-Jewish smuggler on the run. Under the scrutiny of the familiar monsters of the Third Reich, their enablers, and their hangers-on, these four struggle for life and for each other. Love does not conquer all, but it’s far better than going to hell alone.

Review: I expected your typical lesbian love story but what I got was something completely different. Saracen gives us a history lesson of what it was like to live in Berlin during Hitlers rein.  We watch Katja struggle with what is happening in the world around her and with the changes she sees in her homeland and her military husband.  She finds herself being drawn closer to Frederica Brandt one of the secretaries for a top Nazi in the department of Propaganda. When her affection turns to love and when she realizes that several other of her friends are considered perverts for similar feelings Katja starts to question her loyalty to Germany and to her husband. When Katja watches as one of her good friends is imprisoned in a concentration camp for being gay she can't take it anymore and joins the resistance movement.

There are many books about what happened to the Jews during Hitlers time in power but rarely do we hear the stories of the gay and lesbians who were imprisoned for loving the wrong people or the regular people who were imprisoned for minor infractions as political prisoners of war.  All were treated horrible, tortured and killed, held in concentration camps and subjected to the same treatment you read about in other stories of the holocaust. Saracens book tells this little known history and its riveting. Interweaving real speeches, and real people into the story only makes this book stand out more.  Very well researched and written. It deserves a wide audience.
Labels: concentration camps germany lgbt nazi