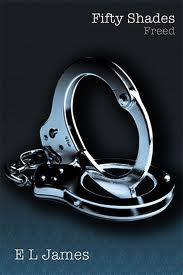 Now, Ana and Christian have it all—love, passion, intimacy, wealth, and a world of possibilities for their future. But Ana knows that loving her Fifty Shades will not be easy, and that being together will pose challenges that neither of them would anticipate. Ana must somehow learn to share Christian’s opulent lifestyle without sacrificing her own identity. And Christian must overcome his compulsion to control as he wrestles with the demons of a tormented past.

Just when it seems that their strength together will eclipse any obstacle, misfortune, malice, and fate conspire to make Ana’s deepest fears turn to reality.

Review: The final chapter in the 50 shades series.  This series went from very very kinky to more main stream romance with a bit of ropes and toys thrown in. Christian is tormented by his past living in the bubble he created with his overwhelming wealth and controlling lifestyle. When Ana comes into his life his world is turned upside down and he has to learn how to deal with things outside his control. Ana wants to work, she wants her own identity and living with a megalomaniac control freak is difficult, but she does an amenable job.

This book is filled with one overwhelming problem after another. First Christian and Ana are being stalked by Ana's old boss, then her father is in a car accident then... well lets just say there is a lot of action in this one.

I know there are a lot of mixed reviews about this book and a lot of people hated the writing thinking it was lame and redundant but I wonder how many of those people have actually ever picked up a romance novel before.  They are all pretty redundant, at least these books seem to have more going on than just kinky sex and a one dimensional mystery.  There are so many issues that come up, some because of money, some because of Christians past and some just because sometimes stuff happens in life when you least expect it.

I appreciate the struggle that Christian has with his past, trying to learn to let go, and I felt that Ana's reactions were well written for a romance, because we all know it wouldn't be a romance novel if the two main characters broke up.  In light of that I think this was a well done series with a unique twist that hasn't really been explored much before. I'm also in love with Ana's inner goddess.  I love how she is always reading classic lit and tilting her glasses down her nose to roll her eyes at things or running around pumping her fists in the air.  I could so relate to that!