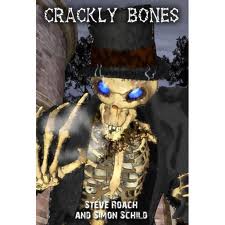 Synopsis: Three hundred years ago, an innocent man was accused of wizardry, and the lies of a child led to his murder at the hands of a frenzied mob. Tonight, he’s back for his revenge. The villagers are stirred into action when signs of Crackly Bones’ impending arrival are witnessed. Led by Jones, the owner of the public house, the people gather and agree to fight, a decision that will have devastating consequences for the entire village.

Review: This was a strange, scary little book written in rhyming poetry.  I couldn't really see many of the drawings because they were too dark but maybe it looks different on the kindle fire. I don't know if I would read this to young children but it would be a great story to read around a camp fire.

I don't know if its supposed to have a moral or not but for me it seems to say don't judge people based on rumors, form your own opinions, condemning people based on assumptions or rumor could have devastating consequences for you and for them.