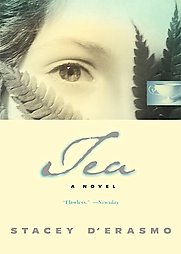 
This novel is currently out of print but you can find some used copies on amazon or at local used book stores.

Synopsis: D'Erasmo unspools the life of Isabel Gold in 3 distinct phases: a child of 8 who loses her troubled mother to suicide; a teen discovering she likes girls as much as pot and Joni Mitchell; and a 22-year-old scrambling to keep her bohemian dreams and her relationship with a cranky Greek girlfriend alive in Lower Manhattan.

Review: Tea is a very strange novel. Broken down in Morning, Afternoon and Evening it tells pieces of the life of Isabel Gold. The beginning of the book deals with her family, her strange, and depressed mother, her born again best friend who calls God on her shoe phone as they re-enact scenes from Get Smart and her realization that she is frightened that her mothers mood will wear off on her if she touches her.  The middle of the book deals with Isabel's coming of age, realizing that she is a lesbian and finding her way through life in the 70's and becoming an actress. At the end of the book we find Isabel living in Manhattan struggling in her relationship with a depressed girlfriend who reminds me of her mother when she is in her dark moods.

I guess it would be like glimpsing different aspects of any ones life.  Isabel seems extremely ordinary to me.  Sure she had a tragic childhood event but the rest of her life seems pretty mundane.  When she was 8 she buries notes and things in yards so that in the future people will dig them up and know about the people who lived where she is, sort of like this novel, glimpses of her mundane life thrown together in a book. I thought that the the death of her mother would make more of an impact but it was just a blip on her radar.  It doesn't even really seem to come up except at strange moments, like on her birthday when she imagines what her mother would have given her as a gift.

If you like character analysis and not plot driven books than this is one for you.  Personally this was not one that will make my list of recommended books.