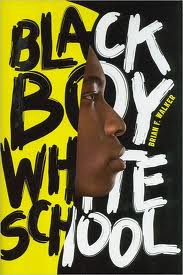 Synopsis: Anthony "Ant" Jones has never been outside his rough East Cleveland neighborhood when he's given a scholarship to Belton Academy, an elite prep school in Maine.

But at Belton things are far from perfect. Everyone calls him "Tony" assumes he's from Brooklyn, expects him to play basketball and yet acts shocked when he fights back.

As Anthony tries to adapt to a world that will never fully accept him, he's in for a rude awakening: Home is becoming a place where he no longer belongs.

Review: Racism...that dirty work no one likes to talk about or brushes under the rug.  It makes people uncomfortable so we don't talk about it or only talk about it on a superficial level.

This is an easy read about a hard subject. "Ant" comes from a rough neighborhood, he doesn't want to go to Maine but after one of his best friends is shot and killed when they are together he makes the decision to go. What he finds is that fitting in might mean losing his identity.  People at school call him Tony no matter how many times he corrects them, they think he is from Brooklyn because thats where the other black kids at the school are from and when he stands up against a hazing tradition he is thought of as dangerous.

Fighting stereotypes is hard, trying to fit but maintain your identity even harder.  I think many people may not understand when "Ant" goes through but as a Puerto Rican Jew who lived in the city and went to school in the suburbs I felt "Ant's" story profoundly.  Oh I looked like I fit in with the other kids but I lived in a two bedroom apartment in a the city and they lived in mansions in a wealthy suburb.  I had one parent and they had two.  It was a struggle to fit in but when I was home it was also a struggle, school changed me.  I was learning about things that the people in my neighborhood couldn't relate to, I was going places they had never been.  When I was home I felt like a stranger and at school I felt like a square peg trying to fit in a round hole. Would I change my experience? Never but it wasn't always easy.

"Ant" had it worse.  He couldn't even try to blend in.  He couldn't change his skin color and the well meaning people at the school had blinders on when it came to racism...if they ignored it or made platitudes it would go away.  But a influx of Somali refuges to the town create a tension in the small Maine town that ultimately lead to "Ant" teaching them a thing or two about race.  I can't recommend this book enough.  It was fabulous.