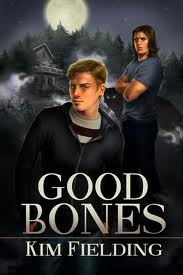 I received this book from netgalley.com

Synopsis: Skinny, quiet hipster Dylan Warner was the kind of guy other men barely glanced at until an evening's indiscretion with a handsome stranger turned him into a werewolf. Now, despite a slightly hairy handicap, he just wants to live an ordinary-if lonely-life as an architect. He tries to keep his wild impulses in check, but after one too many close calls, Dylan gives up his urban life and moves to the country, where he will be less likely to harm someone else. His new home is a dilapidated but promising house that comes with a former Christmas tree farm and a solitary neighbor: sexy, rustic Chris Nock. Dylan hires Chris to help him renovate the farmhouse and quickly discovers his assumptions about his neighbor are inaccurate-and that he'd very much like Chris to become a permanent fixture in his life as well as his home. Between proving himself to his boss, coping with the seductive lure of his dangerous ex-lover, and his limited romantic experience, Dylan finds it hard enough to express himself-how can he bring up his monthly urge to howl at the moon?

Review: I read a lot of different genres and I read a lot of LGBT fiction but for some reason I've never read an lgbt supernatural novel before and I'm sorry I haven't.  I would have to say that this is a male romance novel.  Boy meets boy falls in love but that whole turning furry on the full moon drives a wedge between them. It follows the same formula as female romance books but the main characters are men, hot men.  There are a few pretty hot and heavy sex scenes so if that makes you squeamish this might not be the book for you. I thought it was great.  I liked the main characters, the secondary characters and the story was fun.

The werewolf shifting scenes were very well done, and I could almost smell the forest as he ran after prey. She is very descriptive throughout the whole book which definitely makes the book more enjoyable and damn I want him to build me a house because the renovations on this country house made me envious! The only complaint I have about this book is the cover.  I'm sure there are plenty of hot guys out there that would have posed for this cover...the drawing just made it look like a campy, cheap young adult novel, and covers mean so much! Often I won't even pick up the book unless the cover attracts me - luckily I didn't see the cover before reading the blurb on the back.