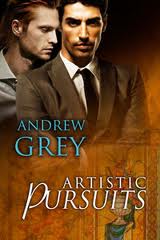 I received this ebook through Netgalley


Synopsis:An Art Series novel Frank Jennings is an FBI agent looking for redemption. Leslie Carlton is an Interpol agent looking for a thief. Attraction flares from the moment they meet on a case searching for a stolen triptych of unique Tiffany windows, but after a single night of stunning passion, Leslie is called back to London to continue his search there. When the case heats up again, Leslie returns to the States—and to Frank—but their investigation is complicated by their tumultuous feelings. Is it possible for two dedicated detectives to pursue each other while they’re tracking down stolen art and the unscrupulous man who steals it?

Review: I found Artistic Pursuits disjointed and a bit hard to follow.  There were many times I thought I missed a page only to realize I was reading an ebook.  Leslie's on again off again accent was also a bit distracting, one minute he sounded mildly British and the next he sounded like everyone else.
My other pet peeve was Frank, I just couldn't see how insecure FBI agent Frank, who masks his sexual orientation by being a jerk at work is this domineering  sexy top. From the first sexual encounter I was thrown off, the characters just didn't seem to fit the action.  Don't get me wrong the first sex scene was smoking hot, but some of the others were a bit confusing, one minute in the shower the next in bed and I just didn't see them in the roles that Grey wrote them in.
.
However, the mystery surrounding the stolen art moved the story along and I liked the interplay between Leslie and Frank as they tried to trap the notorious art thief who hides behind liberal international laws. I loved Leslie putting Frank in his place but by far my favorite character was Karl.  I loved the rookie FBI agent who no one takes seriously and only thinks of as a tech geek but when he gets out into the field he proves himself a worthy partner.