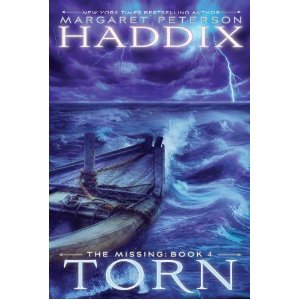 Synopsis: Still reeling from their experiences in Roanoke in 1600, Jonah and Katherine arrive in 1611 only moments before a mutiny on Henry Hudson’s ship in the icy waters of James Bay. But things are messed up: They’ve lost the real John Hudson, and they find what seems to be the fabled Northwest Passage—even though they are pretty sure that route doesn’t actually exist. Will this new version of history replace everything they’ve ever known? Is this the end of time as we know it? With more at stake than ever before, Jonah and Katherine struggle to unravel the mysteries of 1611 and the Hudson Passage...before everything they know is lost.

Review: I love this series.  Based on the idea that time travelers stole key figures from history and brought them forward in time and placed them for adoption with unsuspecting families and now they are being asked to return to their time period in order to correct time.  The problem is that one of the time travelers named Second doesn't want to fix time, he wants to alter it to his liking.  In this book Second has sent Jonah and Katherine to 1611 where Jonah poses as John Hudson the son of Henry Hudson who discovered the Hudson River, among other things, and after a mutiny on his ship disappeared along with his son and several crew members. So besides being a fun read you get to learn about different incidents in history in a fun way. This is a great series for boys or girls.  I think boys would like the action adventure piece of the time travel, the girls might too but they also have Katherine who swoons over every "hottie" they encounter.  Its a fun series that is educational as well.  I highly recommend it.