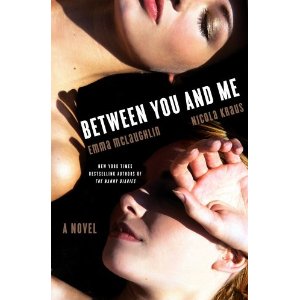 Title: Between You and Me by Emma McLaughlin & Nicola Kraus
Publisher: Atria Books
272 pages
Genre: YA,

I received this book as an e-ARC through netgalley.com - this title is due to be released June 12, 2012


Synopsis:   Twenty-seven-year-old Logan Wade has built a life for herself in New York City, far from her unhappy childhood in Oklahoma. But when she gets the call that her famous cousin needs a new assistant, it’s an offer she can’t refuse. Logan hasn't seen Kelsey since they were separated as kids; in the meantime, Kelsey Wade has become one of Fortune Magazine’s most powerful celebrities and carrion for the paparazzi. But the joy at their reunion is overshadowed by the toxic dynamic between Kelsey and her controlling parents. As Kelsey grasps desperately at a “real” life, Logan risks everything to try and give her cousin the one thing she has never known—happiness. As Kelsey unravels in the most horribly public way Logan finds that she will ultimately have to choose between saving her cousin and saving herself.

Review: The whole time I was reading this book I couldn't help compare it to the train wreck that is Brittany Spears. Kelsey's story is very similar, but the difference is I found that I actually felt sympathy for Kelsey and was routing for her. Maybe that's biased since with Kelsey you get the back story, you get to see her selfish, overbearing parents pushing her beyond limits that anyone is capable of.  She is a prisoner of her own success, no wonder she finally melted down. With Brittany we only see the public side.

Logan on the other hand I had mixed feelings for.  At the beginning of the book she was this strong independent woman, college educated, self sufficient and then she gets sucked into the superficial world of Kelsey Wade. She loses herself to her famous cousin who she hasn't seen in decades.  The transition from modern woman to Kelsey's servant takes place in the blink of an eye.  I understand the lure of fame and helping her once best friend and cousin but she barely even gave it a thought.  It was especially difficult to believe given the tension between Logan and Kelsey's father.  Something happened between them but we aren't sure exactly what it was only that it left Logan in a coma and her parents and Kelsey's parents don't speak anymore. Would you be so forgiving that you would go to work closely with someone who you know may have killed you? I just wish there was more tension between the father and Logan, it would have made it more realistic.

You can almost see this as a cautionary tale, be careful what you wish for because it may not be all that it seems.  Just because you have money and fame doesn't make your life easier, in fact it can make it downright unbearable, with everyone telling you what to do, how to behave, what to wear etc.

So who is the strong one in this story? Is it Kelsey the star who cracks and spirals downward or is it Logan the devoted cousin? My vote is for Kelsey.  But whoever you route for you are in for a ride, so take a sneak peak inside fame and fortune and the not always so glamorous world of the rich and famous.