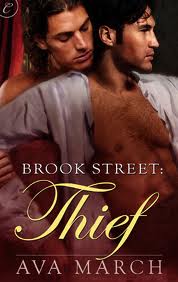 I received this as an e-ARC via netgalley.com from Carina Press.  This title was released in March 2012 and there are two other books in this Brook Street Series.

Synopsis: London, 1822
It was only supposed to be one night. One night to determine once and for all if he truly preferred men. But the last thing Lord Benjamin Parker expected to find in a questionable gambling hall in Cheapside is a gorgeous young man who steals his heart.

It was only supposed to be a job. Cavin Fox has done it many times-select a prime mark, distract him with lust, and leave his pockets empty. Yet when Cavin slips away under the cover of darkness, the only part of Benjamin he leaves untouched is his pockets.

With a taste of his fantasies fulfilled, Benjamin wants more than one night with Cavin. But convincing the elusive young man to give them a chance proves difficult. Cavin lives with a band of thieves in the worst area of London, and he knows there's no place for him in a gentleman's life. Yet Benjamin isn't about to let Cavin-and love-continue to slip away from him.

Review: Hot, steamy and fabulous.  Lord Benjamin knows he is probably gay but has never enjoyed the pleasure of a man, so before the beginning of the season and his siblings pushing him to marry he wants to figure it out once and for all.  At a gambling establishment for like minded men he meets Cavin a thief who is sent to the gambling hell to seduce and rob rich men. When they meet the encounter is electric but once Cavin finds out that Benjamin has never been with any other man he can't bring himself to rob him. But Cavin is a thief and Benjamin a Lord, Cavin knows they have no chance of a life together, or do they?

Filled with steamy sex and a great story this book zips along to its romantic conclusion.