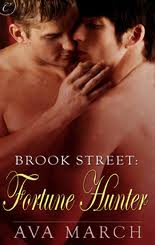 Synopsis: London, 1822
Impoverished Julian Parker returns to London with one goal: marry an heiress. He'll do whatever it takes, even if it means denying his desire for men. After all, with a fortune comes happiness and social acceptance—which have eluded Julian his entire life.

The only things a vast fortune has brought Oscar Woodhaven are greedy relatives and loneliness. At twenty-one years of age, he has everything a man could possibly want—except someone to love him. When he meets devastatingly handsome Julian Parker, he believes his luck has turned.

Between Oscar's lavish gifts and their searing-hot nights, Julian is caught between what he thinks he needs and what his heart truly desires. But when a betrayal threatens to tear them apart, Julian discovers he'll do whatever it takes to convince Oscar the greatest fortune of all is love.

Review: I'm not sure I liked this one as much as I liked "Brook Street: Thief" but it was still a good quick read.  Still hot and steamy but maybe not as steamy as the Thief was - well at least for me.  I liked that the character from the first book was in this one as well, reminding me of the harlequin series that follow different characters in the same group.  The beginning and the end for me were the best and it lost me a little somewhere in the middle but since it was such a short book it was easy to keep going.  I think that characters just lacked something in this one.  Oscar was a bit too naive and Julian just seemed a bit dim.  I mean if you are seeking a fortune and a handsome wealthy man asks you to live with him why would you keep seeking a wife when you don't even like women? Seems just a bit silly to me.
Labels: lgbt m/m male romance romance