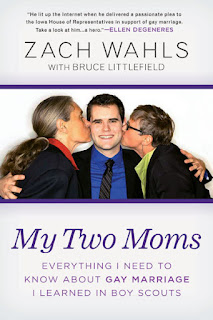 Synopsis: On January 31, 2011, Zach Wahls addressed the Iowa House Judiciary Committee in a public forum regarding full marriage equality. The nineteen-year-old son of a same-sex couple, Wahls proudly proclaimed, “The sexual orientation of my parents has had zero effect on the content of my character.” Hours later, his speech was posted on YouTube, where it went viral, quickly receiving more than two million views. By the end of the week, everyone knew his name and wanted to hear more from the boy with two moms.

Review: I was moved when I saw Zach Wahls address the Iowa Judiciary Committee it was hard to believe he was only 19 years old.  Wahls book is about his family.  Growing up with two moms and how although he doesn't have anything to compare it to he thinks it wasn't too much different than the way a lot of kids grow up.  Sure there were times when he was picked on, or bullied because his family was different and there were times when he hid that he had two moms because he didn't want to be seen as different, not that he was embarrassed by them he just wanted to fit in at that moment.

One of my favorite quotes of the book was "I'm not gay, but I know how it feels to be in the closet." This is such a profound statement.  He has a unique perspective on what gay people deal with on a daily basis.  He has seen his parents struggle for basic rights.  But this book isn't just about having two moms, its about being a good person.  Its about standing up for yourself but not at the expense of someone else.  Its about opening your heart and your mind to differences and being open to listen. He may not change your mind on gay marriage or even gay parenting but I would find it hard to believe that anyone could say that this boy wasn't raised by two very loving parents who instilled in him an amazing value system, and taught him to appreciate the differences in everyone, even those you may not agree with.
Labels: gay families gay marriage lesbian parenting lgbt two moms zach wahls