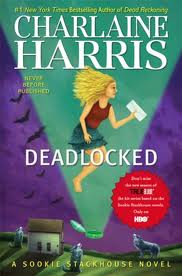 Synopsis: It’s vampire politics as usual around the town of Bon Temps, but never before have they hit so close to Sookie’s heart…

Growing up with telepathic abilities, Sookie Stackhouse realized early on there were things she’d rather not know. And now that she’s an adult, she also realizes that some things she knows about, she’d rather not see—like Eric Northman feeding off another woman. A younger one.

There’s a thing or two she’d like to say about that, but she has to keep quiet—Felipe de Castro, the Vampire King of Louisiana (and Arkansas and Nevada), is in town. It’s the worst possible time for a human body to show up in Eric’s front yard—especially the body of the woman whose blood he just drank.

Now, it’s up to Sookie and Bill, the official Area Five investigator, to solve the murder. Sookie thinks that, at least this time, the dead girl’s fate has nothing to do with her. But she is wrong. She has an enemy, one far more devious than she would ever suspect, who’s set out to make Sookie’s world come crashing down.

Review: I figured since it took me so long to read the last Sookie book that I would just jump right into the latest while I still was in the groove.  I liked this one much better than the last one.  There was more action, more drama and more mystery.  I'm still not sure what she is doing to Sookie and Eric because their relationship is not following how it used to be, Eric's character seems to be acting out of character but maybe thats the point.  He is under stress...if vampires get stressed with the King in town and everything else that is going on that he doesn't like to divulge to Sookie. Yet he still seems a bit off.

This book also flowed better the story lines converged better and it didn't seems as stunted as the last one.  I know a lot of people were disappointed with this book as well but I just didn't feel that way.  I actually found it entertaining and I liked where she took it with the exception of Sookie and Eric.

I'm still finding it hard to separate the TV show True Blood from the books sometimes, like when Tara had her babies and they were all pink - I was thinking uhm Tara is African American...then I remembered she is Caucasian in the book.