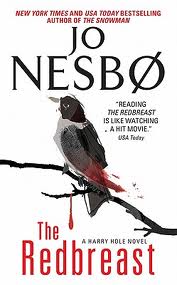 Synopsis: Detective Harry Hole embarrassed the force, and for his sins he’s been reassigned to mundane surveillance tasks. But while monitoring neo-Nazi activities in Oslo, Hole is inadvertently drawn into a mystery with deep roots in Norway’s dark past, when members of the government willingly collaborated with Nazi Germany. More than sixty years later, this black mark won’t wash away—and disgraced old soldiers who once survived a brutal Russian winter are being murdered, one by one. Now, with only a stained and guilty conscience to guide him, an angry, alcoholic, error-prone policeman must make his way safely past the traps and mirrors of a twisted criminal mind. For a conspiracy is taking rapid and hideous shape around Hole . . . and Norway’s darkest hour may be still to come.

Review: I wasn't quite sure about this book in the beginning.  I think I'm getting tired of burned out drunk detectives, but this one surprised me.  Flipping back and forth between the present and the past we learn about a dark spot in Norway's history and what can push a man over the edge.  It was a little confusing at first trying to figure out how things tied together but as you get further along it really takes off.  I really started to like Harry by the end of this book and look forward to the next one. He was flawed but he wasn't broken, and he learns how to play the political game very quickly.  I also like that there were strings left hanging for Harry to pick up in the next novel.  It wasn't all neatly wrapped up in the end but you also weren't left with a cliff hanger, it was just a path untraveled.