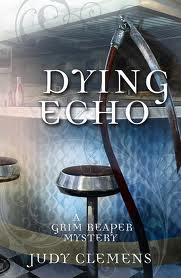 I received this book as an electronic ARC from netgalley.com.  It was published August 7, 2012

Review: This is the 4th book in this series and after reading this one I think I am going to go back and read the others.  Casey is a broken woman, her husband and young son were killed in a car accident that Casey barely escaped.  But escape she did and she has been torturing herself ever since, begging for death, who is now her traveling companion, literally.  The grim reaper travels with Casey helping her with information that she needs, and nudging her toward life.  He is fun, quirky and has a killer sense of humor.

Casey returns to her hometown when she finds out her brother has been charged with the murder of his girlfriend.  As she digs into the case she discovers that the girlfriend is not who she seems to be, in fact no one seems to know who she really is, with the exception of Death. Since she can't go to the police with information obtained from a supernatural being she sets out to uncover evidence that she can use.  Along the way she is aided by a man she met in the last book who wants more from Casey than she is ready to give.

This book left me wanting more.  Casey is so emotionally wrecked that you can feel her pain ooze off the pages, and Death give a great levity to the whole book.  He always has a quick witty remark or snarky comment to make.  He is fascinated by electronics and is constantly creating mobile phones and ipads to occupy himself. I believe he wants Casey to move on and learn to live again but also will miss her if she decides to embrace life once more.  This is definitely a series to keep your eye on.
Labels: death dying echo grim reaper judy clemens mystery