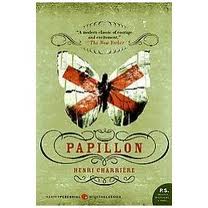 Synopsis:  Henri CharriÈre, called "Papillon," for the butterfly tattoo on his chest, was convicted in Paris in 1931 of a murder he did not commit. Sentenced to life imprisonment in the penal colony of French Guiana, he became obsessed with one goal:escape. After planning and executing a series of treacherous yet failed attempts over many years, he was eventually sent to the notorious prison, Devil's Island, a place from which no one had ever escaped . . . until Papillon. His flight to freedom remains one of the most incredible feats of human cunning, will, and endurance ever undertaken.

Review: An unbelievable story of adventure and redemption.  Henri called Papillon or Papi by his friends is sentenced to life imprisonment and makes it his goal to escape.  He escapes once and winds up with a native tribe where he lives for almost a year.  He leaves still bent on revenge against the people who wrongly imprisoned him.  Leaving behind 2 pregnant wives and a new family of friends he  tries to make his way back to France, but is captured and sent back to prison where he spends 8 years trying to escape again. Although he keeps trying to escape he wants to do it with as little impact on the other prisoners or the guards and wardens.  He finally gives up his idea of revenge and decides to move forward and just live.