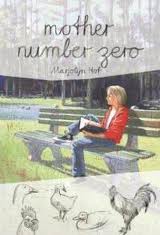 Synopsis:  No one in Fay's family looks like anyone else, because Fay and his sister, Bing, were adopted. Fay only knows that his birth mother escaped the war in Bosnia, and that he arrived in his new home with nothing more than a squeaky toy and a few clothes. But when Fay meets Maud, the new girl in town, she's curious about his birth mother and about what it's like to be adopted. And on top of that, she says smack in the middle of the street that she likes him.
Suddenly Fay is full of questions — mother questions and Maud questions. Who is his birth mother, or mother number zero, as he calls her? Why did she give him away? Is it bad to want to find her? And what should he do about Maud? Could he be in love without realizing it? With his parents' help, Fay begins to look for mother number zero, and as the search unfolds, he finds some surprising answers to his questions.

Review: This book is great to get the conversation started about birth parents, their situations and what happens when one child is able to find their birth parent and the other isn't. The emotions were very realistic and the conversations were well done. This would be a great read for parents whose children are starting to question where they came from and also for kids 9 and up.