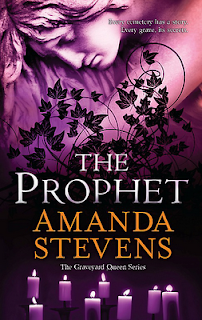 Synopsis: My name is Amelia Gray.

I am the Graveyard Queen, a cemetery restorer who sees ghosts. My father passed down four rules to keep me safe and I've broken every last one. A door has opened and evil wants me back.

In order to protect myself, I've vowed to return to those rules. But the ghost of a murdered cop needs my help to find his killer. The clues lead me to the dark side of Charleston—where witchcraft, root doctors and black magic still flourish—and back to John Devlin, a haunted police detective I should only love from afar.

Review: This is the third book in the Graveyard Queen series.  I liked this one much better than the last book, although I think the ending was a bit rushed.  You are left hanging waiting for the next book, and while this is good for TV I'm not a fan of it in books.

Amelia has broken all the rules her father taught her when it comes to interacting with ghosts and now she is starting to question that decision.  In the last book of this series she discovered her roots and why she may have these strange powers to talk see the dead. She also found something something evil that was seeking her.

In this 3rd book of the series Amelia returns home to the broken and haunted cop, John Devlin, She can't seem to get out of her system. Of course the ghost of the John's wife doesn't want Amelia around..or does she?  Amelia is also being haunted by the John's ex partner in the police force- and lover of his dead wife. He believes he is there to get Amelia's help to solve his murder but maybe there is more to it than he believes.

Can Amelia save herself and the man she is in love with?