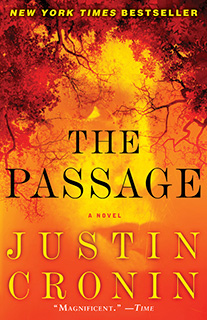 Synopsis: Cronin imagines the catastrophic possibilities of a vampiric bat virus unleashed upon the world. Discovered by the U.S. Military in South America, the virus is transported to a laboratory in the Colorado mountains where it is engineered to create a more invincible soldier. The virus’ potential benefits are profound: it has the power to make human beings immortal and indestructible. Yet, like Prometheus’ theft of fire from the Gods, knowledge and technological advancement are gained at great price: After the introduction of the virus into the human blood pool, it becomes clear that there will be hell to pay. The guinea pigs of the NOAH experiment, twelve men condemned to die on death row, become a superhuman race of vampire-like creatures called Virals. Soon, the population of the earth is either dead or infected, their minds controlled telepathically by the Virals. As most of human civilization has been wiped out by the Virals, the few surviving humans create settlements and live off the land with a fortitude the pilgrims would have admired. Only Amy, an abandoned little girl who becomes a mystical antidote to the creatures’ powers, will be able to save the world.


Review: This book reminds me of World Enough & Time by James Kahn in that humans once again ruin the world they live in because science outweighs thought.  Just because you can do something doesn't mean you should.  I guess in words of Stan Lee "with great power, comes great responsibility"

Justin Cronin takes you on an epic journey from one man effected by the death of his wife who discovers a way to prevent it, to the man who is effected by the death of his daughter and despite his help with this project struggles to protect the youngest subject. The aftermath of these experiments is the demise of the world as we know it.  Now living in a small protected camp a few people survive, fighting off the virals, and trying to stay alive.  Most of what we know has been lost, but one girl may hold all the answers.

This is not just a story of doom, it is the story of hope, of rebuilding, of survival. Of figuring out who you are, what you are capable of in the face of the most horrific and deadly situations and who you want to be.

I may have finished the book but its one that will stay with me for a long time.  Its almost a haunting cautionary tale of what we are capable of and what we should never allow to happen.
Labels: dystopian fantasy justin cronin the passage vampires