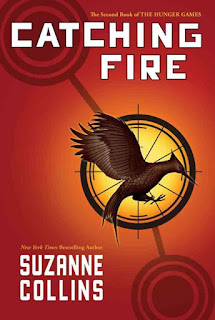 Synopsis: Katniss, again the narrator, returns home to find herself more the center of attention than ever. The sinister President Snow surprises her with a visit, and Katniss’s fear when Snow meets with her alone is both palpable and justified. Catching Fire is divided into three parts: Katniss and Peeta’s mandatory Victory Tour through the districts, preparations for the 75th Annual Hunger Games, and a truncated version of the Games themselves. Slower paced than its predecessor, this sequel explores the nation of Panem: its power structure, rumors of a secret district, and a spreading rebellion, ignited by Katniss and Peeta’s subversive victory.

Review: The book starts with Katniss and Peeta needing to get ready for their Victory tour of the districts...where they get to go and stand in front of the families of those that they killed or at least avoided long enough for someone else to kill. Before that Katniss receives a visit from President Snow who basically tells her, her time is limited and he can't have her around after she found a way to best the Capital at the Games.  Undone and trying her hardest to hold it together for her family and to save them, Peeta and Gale you often forget that Katniss is supposed to only be 16 or 17.

When she returns from her tour she finds that things have changed in her district.  Things are stricter, she can't go hunting anymore and rules that hadn't been enforced are now being enforced in cruel ways on the people of her district.  Katniss blames herself and her actions for the plight of her people but doesn't know what to do to help them.  When the announcement is made for the special Hunger Games called the Quell she learns that the people competing are to be picked from all the past winners.  Since she is the only female winner in District 12 she knows she is going again.

This book was much more intricate than the first one, more political and much more dangerous.  You can really feel the danger. Peeta seems to step up and really find himself in this book and I think Gale becomes a whiney little bitch.  I know there are people who think Gale is the best choice for Katniss but I think he is a little too self absorbed to be of any balance to her.  Of course this book ends on a cliff hanger so now I have to go find a copy of Mocking Jay asap!

I think this was a really nice follow up to the Hunger Games and didn't sugar coat the atrocity that is the Hunger Games.  You can't win that and lead a normal life, its no wonder that Hamish is an alcoholic or that other winners turned to other types of drugs.  Yay you won! You just killed a bunch of other kids in the most gruesome way possible and it was televised and people were betting on you like you were a dog or something...gross.  I think that this is the book that really brings home how out of touch the people in the Capital are and how much those in the districts suffer.  Did they really think there wouldn't be another rebellion?
Labels: Catching Fire District 12 Hunger games Katniss Peeta Suzanne Collins