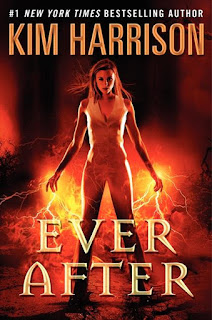 Synopsis: The ever-after, the demonic realm that parallels our own, is shrinking, and if it disappears, so does all magic. It's up to witch-turned-daywalking-demon Rachel Morgan to fix the ever-after before the fragile balance between magic users and humans falls apart.

Of course, there's also the small fact that Rachel is the one who caused the ley line to rip in the first place, and her life is forfeit unless she can fix it. Not to mention the most powerful demon in the ever-after—the soul-eater Ku'Sox Sha-Ku'ru—has vowed to destroy her, and has kidnapped her friend and her goddaughter as leverage. If Rachel doesn't give herself up, they will die.

Forced by circumstance, Rachel teams up with elven tycoon Trent Kalamack—a partnership fraught with dangers of the heart as well as betrayal of the soul—to return to the ever-after and rescue those she loves. One world teeters on the brink of interspecies war, the other on the brink of its very demise—and it's up to Rachel to keep them both from being destroyed.

Review: Rachel is truly on her own in this one.  Ivy (the vampire) is off playing house in another city, Jenks (the Pixy) can't enter the Ever After during the day.  So its up to Rachel to help Trent save his daughter and Ceri and fix the Ever After from becoming extinct.  Of course that isn't easy when you have the most powerful demon ever created trying to kill you and redesign the world.

I think that Rachel and Trents relationship really gets solidified in this book and even though Rachel hates the Ever After and doesn't like being a demon she doesn't want to see it destroyed.  You also get to really know her demon mentor Al and I started to have a soft spot for him, there is much more to him than his harsh nasty exterior.

While the ley lines go crazy and the Ever After shrinks Rachel and her Gargoyle teen try to figure out how to fix it for everyone.  Without the ley lines, magic will be seriously inhibited and without the Ever After there will be no more demons, which may not be a bad thing but some of them are planning on escaping through babies that have a rare genetic disease that can be genetically fixed to make them demons...of course only millionaire Trent knows how to make that happen.

While so many of these books are just fumbling mind candy I really enjoyed this one.  There seemed to be more depth to it and you really got to see a peek into some of the characters other layers.  I would caution you that if you haven't started this series don't start with this one there is too much back story you really need to know, too many relationships you need to understand.  Out of all of them though this one I think is my favorite and its good to see Rachel starting to come into her own instead of always being the one to screw things up that everyone else has to come in and fix.
Labels: Ever After Hollows Kim Harrison Rachel Morgan