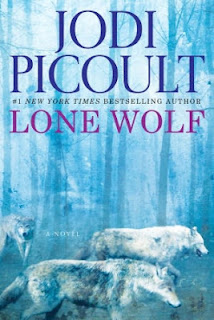 Synopsis: Estranged from his family while living in Thailand for the past six years, Edward Warren is summoned home to New Hampshire when his father, Luke, a renowned wolf expert, and Edward’s 17-year-old sister, Cara, are critically injured in a car accident. Cara’s wounds are not life-threatening, but Luke has suffered severe brain damage and languishes in a vegetative state doctors say is irreversible. As his father’s legal next-of-kin, it falls to Edward to make the hard choices about life support and organ donation, a nearly impossible responsibility, given that father and son parted on angry terms the night Edward tried to confide to Luke that he was gay. Then Cara becomes a volatile advocate for her father’s right-to-life, taking impulsive steps to wrest control away from Edward.

Review: True to form Jodi Picoult has given us another ethical quandry, when do you terminate life support for a loved one and who should make that decision.  Its a challenging question and one that I will admit that I struggle with often when thinking about writing out a living will, I mean I don't want to die and whose to say I won't get better?  That is the challenge facing these two children and yes I say children even though Edward is of age to make the decision.  I find that the mother of these children is very absent in her decision leaving it up to them to decide and since they are on opposite sides not wanting to take sides.  I find that hard to swallow.  I can't imagine she wouldn't have something to say even if it were to sit both of them down and get them to talk it out.

If you can put aside that flaw I find the arguments and the counter arguments very compelling.  When it comes down to it do we make a decision based on what we want or what we think the person whose plug is being pulled would want? And how do we know what that is for certain?  And during such an emotional time are you really able to set aside your own feelings and make that choice for someone else? If nothing else Jodi Picoult has a way of making you think and getting you talking about things that normally don't get talked about.  Is this her best book? No, is it up there on the list? I'm not sure but I did find it compelling enough to keep reading and questioning what I would do.  Its a story that will sit with me for a while and that to me is worth the read.

On a side not the information on wolves and pack behavior is fascinating and really gave me some good insight on the crazy pack of 4 dogs I live with.  They may not be wolves but they are close enough.