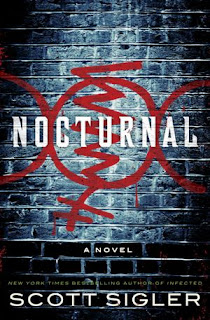 As Bryan and his longtime partner, Lawrence “Pookie” Chang, investigate the murders, they learn that things are even stranger than they at first seem. For the victims are all enemies of a seemingly ordinary young boy—a boy who is gripped by the same dreams that haunt Bryan.  Meanwhile, a shadowy vigilante, seemingly armed with superhuman powers, is out there killing the killers.  And Bryan and Pookie’s superiors—from the mayor on down—seem strangely eager to keep the detectives from discovering the truth.

Doubting his own sanity and stripped of his badge, Bryan begins to suspect that he’s stumbled into the crosshairs of a shadow war that has gripped his city for more than a century—a war waged by a race of killers living in San Francisco’s unknown, underground ruins, emerging at night to feed on those who will not be missed.

Review: Bryan Clauser is a good cop and has rarely been sick in his life.  He has the nickname "Terminator" among his collegues due to his almost expressionless attitude and deadly aim in a firefight.  Many cops never draw their weapons in their entire career, but Bryan has killed 5 people in clean shoots.  His aim is true and he has saved the life of at least 2 other officers.  When Bryan and his joke cracking partner Pookie get called to a crime scene weird things start happening to Bryan.  He gets sick for the first time that he can remember.  Really sick, and he is hearing strange voices, drawing weird symbols and having dreams about murders that turn out to be real.

With his sanity and his job on the line Bryan and Pookie try to figure out what is happening and why their boss seems to want her best detectives on a case that involves cult symbols and a body count that keeps growing.

This is a fast paced, creepy ride.  You have no idea where things are leading in the beginning and as the story plays out you still aren't sure where it will all end.  Some have compared this book to Stephen King but I would say its closer to John Connelly.  Spooky, detailed and something other worldly.  The characters are wonderful. Pookie in my opinion is the star of this book, despite Bryan being the main character Pookie steals the show with his witty remarks and dedication to his partner who he isn't sure hasn't lost his marbles.  This is definitely a book that could have a sequel but so far he hasn't written any sequels to any of his other novels.  This book keeps you guessing, reading more into those missing persons reports you hear on the news and looking over your shoulder when you go out at night.
Labels: bryan clauser monsters mystery Nocturnal scott sigler