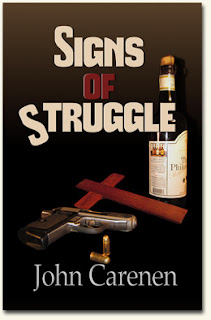 Synopsis: After losing his family in a tragic car accident, Thomas O’Shea finds himself driving around the Iowa countryside, trying to find peace on a quiet afternoon. But when he stops to admire a unique mailbox, he sees a beautiful, bloody woman racing down the country lane from her home, screaming for help. Not wanting to get involved, Thomas considers not helping. Eventually his heroic side wins out.

As Thomas continues lifting up and peering under rocks in the beautiful river town of Rockbluff, Iowa, the more he learns…and the more he attracts those who will do anything to stop him. Attempts on his life are made, but O’Shea is a tough guy with nothing to lose as he struggles with the loss of his family, drinking, women, and his guilt for precipitating so much violence in this peaceful town.

Review: I had no idea what this book was about when I first opened it up and started reading.  It was one of those mysterious books that I downloaded onto my kindle and forgot about until I found myself at the gym on a bike looking for something to occupy me other than trashy tv shows or the news.  I was instantly sucked in.

This book has many mysteries surrounding it, such as who is Thomas O'Shea, for he is not the mild mannered person he appears to be, and what is going on in this small town.  One is answered the other is not but it didn't take away from my enjoyment of the book.

Thomas is a man struggling.  His entire family is killed in a horrific car accident leaving him reeling.  He is trying to make his way back into life with the help of his bulldog "Gotcha".  He moves to the small town of Rockbluff and with the help of bar tender and owner of the Grain of Truth Bar, Lunatic Mooning, he tries to immerse himself in the community.  In the process he meets a host of other quirky and fabulous characters, such as Horace a dying man who is living every day as if it was his last, Bunza Steele another bar tender at a biker bar on the outskirts of town and many others that leave you laughing and some that make you want to run them over with your car.

My biggest complaint about this book was the ending.  It felt rushed and I was left sort of dangling and wanting more closure.  Who knows maybe the author is writing a sequel, maybe not, either way this was a highly entertaining book that kept you guessing.
Labels: farms grief Iowa John Carenen murder signs of struggle