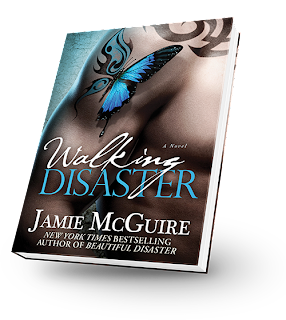 I received an advanced e-copy of this book through netgalley.com - it is currently available in book stores.

Synopsis: Can you love someone too much? Travis Maddox learned two things from his mother before she died: Love hard. Fight harder. In Walking Disaster, the life of Travis is full of fast women, underground gambling, and violence. But just when he thinks he is invincible, Abby Abernathy brings him to his knees. Every story has two sides. In Beautiful Disaster, Abby had her say. Now it’s time to see the story through Travis’s eyes.

Review: Travis Maddox is a player.  He goes through women like tissue, and makes no excuses about it.  When he meets Abby he knows she is something special, there is just something different about her. I honestly can't remember the first book of this series but it doesn't matter. Seeing Travis torn apart by emotions he has never had before was heartbreaking and I just wanted to smack him and Abby upside the head several times but when I think back about some of my college relationships the same could probably have been said about me.  Drama, drama, drama.  If you are honest with yourself this is probably one of the more accurate accounts of a relationship that I have ever read.  Heartbreaking, ridiculous, manic and caring, this book has it all.

Some of the back story was a bit over the top but it is a romance novel and who cares because it carried the story along. I was a little disturbed by how jealous and possessive Travis was in the book, made me think of all the crazy stalker guys out there who kill their girlfriends so no one else can have them, but he seemed to lighten up and become a bit more real toward the end. I just wouldn't want anyone who is dating someone with so much anger and possessiveness to take it too lightly.  Travis is a character, people in real life who behave like that are much scarier and unpredictable.
Labels: beautiful disaster jamie mcguire romance travis maddox walking disaster