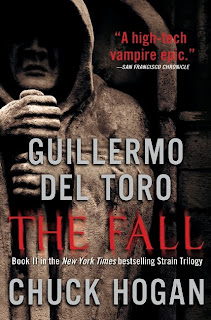 Synopsis: The vampiric virus unleashed in The Strain has taken over New York City. It is spreading across the country and soon, the world. Amid the chaos, Eph Goodweather—head of the Center for Disease Control’s team—leads a small band out to stop these bloodthirsty monsters. But it may be too late.

Ignited by the Master’s horrific plan, a war erupts between Old and New World vampires, each vying for total control. Caught between these warring forces, humans—powerless and vulnerable—are no longer the consumers, but the consumed.

Though Eph understands the vampiric plague better than anyone, even he cannot protect those he loves from the invading evil. His ex-wife, Kelly, has been turned by the Master, and now she stalks the city, in the darkness, looking for her chance to reclaim Zack, Eph’s young son.

With the future of the world in the balance, Eph and his courageous team, guided by the brilliant former professor and Holocaust survivor Abraham Setrakian and exterminator Vasiliy Fet, must combat a terror whose ultimate plan is more terrible than anyone first imagined—a fate worse than annihilation.

Review: Fast paced and non stop action.The Strain focused on unleashing the virus on humanity The Fall focuses on the fight for humanity.  The Master has more than one trick up his sleeve, and turning as many people as he can into vampires is just the tip of the iceberg.

Setrakian, Eph, Fet and some new additions fight to find a way to stop the spread of the vampire virus but their efforts might be in vain.  They do however know where some of the secrets to defeating them lie, they just need to get their hands on it and then try to decipher its meaning.

The Fall literally is the downfall of humanity, the war has begun and the humans don't seem to be winning the battle. They are hanging on by their fingertips, and of course we won't know the outcome until the third book is done.

Hogan & Del Toro have put together a disturbing, graphic and totally unromantic take on vampire lore and the fall of humanity, which seems to be a new theme with books these days (ex. The Passage). They have crafted a good story that keeps you engaged and challenges you to find a solution where none seems visible. Go along for the ride so far it hasn't been disappointing.
Labels: chuck hogan end of humanity guillermo del toro the fall the strain vampires